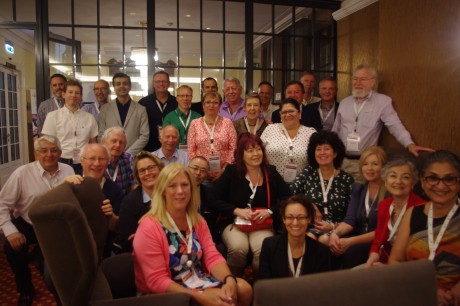 Last week, three GSUK trustees were privileged to attend a most stimulating and informative New Horizons GISTconference in Vienna on supporting GIST patients. Our heads are buzzing with what we learned and the people we met and we are working to compile a report so that we can feed back what we have learned to others in our community. We will have access to the detail, in the formal reports, text and presentation and slides from the organisers over the coming weeks but in the interim here are just a few thoughts off the top of our heads – in no particular order. More detailed and considered responses will follow later.

GIST is complex: We tend to speak of “GIST” as if it were a single condition, but it is not. There are numerous subdivisions, and repeatedly through the conference, speakers were qualifying their statements about treatment options, as being applicable (or not) to specific examples among these sub-types.

Patient support is complex: We were struck by how many of the most enthusiastic, hard-working patient advocates present were not themselves patients, but partners or other family members. It was also notable that many of these continued to put in considerable effort even after their family members had died. This is an heroic contribution on their part, for which we should be deeply grateful. The value of the support that our family members give to patients is widely recognised. What is not often acknowledged, is that the carers themselves need support – which may not be forthcoming. Just as patients’ physical needs are immensely varied, so are their emotional needs.

Patient knowledge is important, and valued: We tend to think of the clinicians and medical researchers as the “experts” on GIST, but it’s not as simple as that. Some of our GIST specialist speakers said to us, in different words, that “you, the patients, are the experts”. Conversely, some of the patient support groups reported how by speaking to regulators and others about knowledge from their patients’ experience, they had been able to complement and add to the formal body of scientific knowledge.

Collaboration/Partnerships are important: We often hear reports of “collaboration” or “partnerships”. Just as real-world evidence complements and enhances formal scientific research, so there are many other forms of partnership and collaboration bearing fruit: between different stakeholders, between countries, even between academic and professional disciplines.

Data is valuable: One of the buzzwords of modern economics is that “data is the new oil”. Indeed, the most valuable businesses today are precisely those who make their money from data. It is not however, the data itself that generates value, but what those businesses are able to do with it. In the short history of GIST, an enormous bank of data has been generated. The challenge now is to turn that raw material into usable information. During this conference, we heard several interesting examples of how some groups and academics are doing precisely that.

There is hope: For years, there have been just three lines of drug treatment available to GIST patients (imatinib, sunitinib, and regorafinib). In addition, some patients have been able to access additional products as part of a range of clinical trials – but to-date, none of these further trials have led to approved medications becoming available. That could be about to change. Some of the clinicians present were clearly and explicitly “very excited” about some of the products currently being tried as third and fourth line treatments. In addition to new and improved drugs, there are also additional forms of treatment potentially becoming available in the future. These notes are no more than the headlines – We will do our best to expand upon them over the coming weeks.

We use cookies to ensure that we give you the best experience on our website. If you continue to use this site we will assume that you are happy with it.OKPrivacy Policy