There are some sub-variants of GIST which are extremely rare and which have  been grouped together as "PAWS-GIST". These are:

An alliance of medical specialists and patients called PAWS-GIST is working to help further knowledge on these rare kinds of GIST. Since work started it has helped to develop the infrastructure for GIST research in the UK and in addition to establishing a PAWS-GIST clinic www.pawsgistclinic.org.uk which convenes three times per annum, has been the catalyst for the National GIST Tissue Bank and a variety of research projects including work to establish Wild-type GIST cell lines and Xenografts.

Paediatric/Adolescent GIST differs from adult GIST in many respects. It is more prevalent among girls and young women than among boys and young men. In the main, the illness starts in the stomach, where several primary tumours can present themselves at the same time. Metastases in the lymph nodes are also commoner than in the case of ordinary GIST.

If the genetic make-up of the tumour cells is examined (mutation analysis), typically no mutations are found in either of the genes which are frequently altered in adult patients (KIT and PDGFRA), and this is referred to as "Wild-Type GIST".

Imatinib seems on the whole to work less effectively on patients with PAWS-GIST than it does for ordinary GIST. But there is also some good news: the tumours often grow more slowly and behave in a less aggressive way than their counterparts in adults. Young adults suffering from GIST are often found to have the wild-type GIST.

Syndromic GIST. A few paediatric/adolescent GIST patients may also have what is known as "Carney's Triad" or the " Carney-Stratakis-Syndrome". In both these illnesses, further tumours are found along with the GISTs. In cases of Carney-Stratakis-Syndrome there are also tumours originating in the nervous system. These are called paragangliomas. In patients with Carney-Triad, benign lung tumours (pulmonary chondromas) are observed along with GIST and paragangliomas) as well as, in some isolated cases, benign tumours of the suprarenal gland (adenomas), and benign tumours of the oesophagus (leiomyomas). Patients just suffering initially from paediatric/adolescent GIST may develop these other types of tumour over time. While Carney-Stratakis-Syndrome seems to be hereditary, it is not thought that the same applies to Carney-Triads.

Because PAWS-GISTs are so rare we still know relatively little about them. However, there are some centres where studies are being carried out, notably in Bethesda in the USA and also via the PAWS-GIST clinic at Addenbrookes Hospital in Cambridge UK.

NIH Clinic in Bethesda - Since their first meeting in June 2008, which was attended by just 14 patients from around the world, the scientists taking part have established the Consortium for Paediatric and Wild-type GIST Research, CPGR.

This research consortium is open to other doctors and scientists interested in Paediatric and Wildtype GIST, and data is being collected from as many sources as possible. The scientists who take part will meet in the USA at the National Institute of Health.

PAWS-GIST was started in November 2010 when the parent of a young GIST patient and specialist GIST doctors from the UK formed an alliance.

Working in partnership with experts in America & Europe the aim is to improve treatment & ultimately find a cure for PAWS-GIST.

If you are a Paediatric or Wild-type GIST patient/carer, please make contact with us. Our numbers are small, so we need everyone to be involved in order to take full advantage of the help that is being offered.

We have established a clinic in the UK for PAWS-GIST patients. This clinic meets three times a year and its objective is to develop greater expertise in treating this rare group of patients. The PAWS-GIST clinicians are a focus group for oncologists all over the UK.  For further information about this clinic go to www.pawsgistclinic.org.uk.

PAWS-GIST patients, carers and supporters are raising funds for this initiative and for research.

If you would like to support this aim with a donation please see our donation page...

Donate to our PAWS-GIST Fund
Help us to Find the Cure!

Alternatively you can set up your own Justgiving page to raise funds for PAWS-GIST or you can click here  to download a PAWS-GIST sponsorship form which you can use.

We now have a dedicated fundraising co-ordinator for PAWS- GIST who will help you with any of your fundraising activities. You can request our new fundraising pack by contacting: fundraising@gistcancer.org.uk

If you are affected by PAWS-GIST and would like to learn more or be involved with any of these initiatives please contact:
Jayne Bressington at: info@pawsgistclinic.org.uk 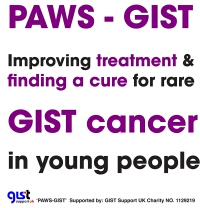