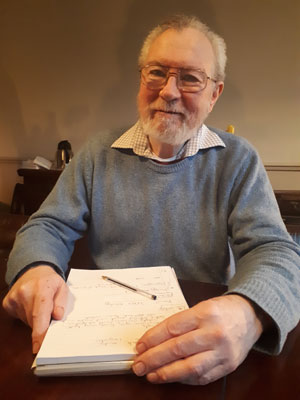 I was diagnosed in late summer 2014, when I experienced some sharp and persistent abdominal pain. This was initially diagnosed as a bowel problem, and was prescribed anitobiotics. When it did not respond to treatment, I was referred to RSCH Guildford for further investigation. A CT scan showed a massive stomach tumour, described as a suspected “Gastro Intestinal Stromal Tumour”.

As I had never heard of this, but noted the word “tumour”, I got onto the net to learn more – and found information on the cancer sites. Any cancer diagnosis is scary, so I set about setting up support systems and as much further information as I could. From the GIST Cancer UK website (and others), I signed up to our useful email group, and also broke the news to family and selected friends.

Further tests confirmed that it was a GIST, assessed at 26x19cm. As this was too large for surgery, I was put onto an initial course of imatinib to shrink it, with 3-month scans and oncologist meetings to monitor progress. I was apprehensive about what I had heard of the possible side-effects of imatinib, but found that I could tolerate it quite easily, with only minor issues.

The immediate decision facing me was whether I should request transfer to a specialist centre, as advised on our website. However, RSCH assured me that although not GIST specialists, they did have some experience with it, had specialist expertise in stomach cancers, and worked closely with the Marsden. As I had been impressed by the speed with which they responded after the initial scan, I decided to stay with them.

When shrinkage stopped after 9 months, it was time for surgery – but before taking any decision, I asked for a second opinion from a specialist centre (UCLH, Euston) where I saw Dr Beatrice Seddon. I I was impressed by the thoroughness of her preparation and how attentively she listened, so I then transferred ongoing care to her, and scheduled surgery at the Royal Free for February 2016. This, I was told, would include removal of my stomach, spleen, and possibly more.

I had of course been very worried about the surgery and implications of life with no stomach, but in practice the delay between diagnosis and surgery had given me time to prepare myself mentally – including some serious reflections on mortality. I also found great value in the support of family and friends, which showed the value of having been open about my condition from the start.

In the end, I found the surgery experience not nearly as traumatic as expected, and the care at Royal Free excellent. I also found that the return to eating much easier than described in our guidelines, or elsewhere. I had expected to be on a gradual transition from a liquid diet, to semi-solids, to “soft” solids before the full range of food. Instead, after a week of “nil by mouth” in hospital (not even water), I was immediately able to start eating even soft solids (mash, pasta, fish, vegetables). Within a week of discharge, I was able to take short walks about the neighbourhood and some local driving. Quite soon, I found that my eating was almost back to normal, as long as I divided my main meal into two sittings, chewed well, and ate slowly.

Standard guidelines for life without a stomach include warnings of the possibility of “dumping” and diarrhoea – but I’ve avoided dumping entirely, and although bowel movements can be variable, they never quite amount to diarrhoea. I did develop a mild aversion (not quite intolerance) to milk and dairy products, but I have no problem with “lactose-free milk”.

A massive GIST and loss of the stomach are of course life-changing – but looking back four years later, life does not in fact feel dramatically worse, just different. I’ve been lucky of course. I do have some side-effects from either the medication or surgery, but these are pretty mild and not disabling: fatigue and loss of energy, puffiness and watering around the eyes, cracked lips in winter, very occasional muscle cramps, some oddities with bowel movements - but it’s certainly been much easier than at first I feared. For this, I am grateful for the extensive support and information I’ve received from GIST Cancer UK, excellent care by NHS staff and infrastructure – and loving care from family and friends.

I’m satisfied with the important choices I’ve made along the way:

I firmly believe that these were right for me, and helped me to cope and recover. However, we are all different in our responses: others may find that different choices work for them.