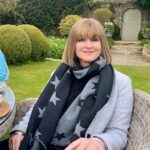 He carried out a stool sample which was positive for blood although I had not seen any signs of blood myself. I had no other symptoms apart from feeling very tired, but I thought this was due to lock down and generally not doing much, as I was furloughed. I was then referred to the hospital for an endoscopy and colonoscopy. The results of both of these tests were clear.

Fortunately, my consultant wanted to find out why I was losing blood and referred me for a CT scan. I was then diagnosed with a Gastrointestinal Stromal Tumour (GIST).

Once diagnosed I was scheduled for surgery 10 days later. I underwent surgery on Friday 13 November and a 7cm GIST tumour was removed from my small intestine, just after the join to my stomach. I then spent 12 days in hospital. The results of the histology of the tumour were good and so I didn't need any further treatment. Six months later and I've had my first check and blood test and I still don't currently need any further treatment.