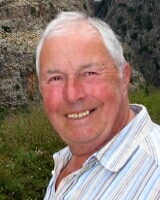 I am 75 and in October 2010 was on a 3-weeks holiday in Turkey with my wife. We enjoy walking and most days we would walk along the coast, over the headland, and onwards to a deserted beach - taking about an hour and a half. Say an average couple of hours fairly level walking each day.

At the start of our third week I immediately (and unexpectedly) lost my appetite and I started to look decidedly pregnant ! (Or with an embarrassing "beer gut" hanging over my 36" waist).

We were in a lovely hotel, with an excellent presentation of food. I felt so nauseous that, for the last seven days, I had yogurt and honey for breakfast, no lunch, and for dinner I was selecting a small bowl of soup, three or four thin slices of beetroot, and - when I got to the Chef's specialities - no Sea Bass [which I love] simply a dollop of mashed potatoes with only the juices from the beautifully cooked steaks on offer! I forewent any desert. After my small bowl of yogurt, my entire day's food intake would have fitted on a saucer. We both thought the problem was a self-administered adverse reaction to a new diabetes drug I had been prescribed.

The moment we returned (2:30 in the Tuesday morning after a 12-hour delay) I rang for a doctor's appointment as soon as the surgery opened at 8:30. The earliest was the following day so, after examining my "baby" (girth now 41") the Doctor tried unsuccessfully to get an immediate CT scan at Arrow Park hospital. She phoned us later to say she the earliest scan she could arrange was an ultrasound scan at Clatterbridge Hospital for the following Monday.

The Doctor who performed the scan confirmed that I needed an urgent CT scan. My own GP phoned me later to say he wanted to see me ASAP and arranged an appointment the following morning. He informed my wife and I that the ultrasound scan had indicated a terminal cancer: "Liver metastasis from an unknown site" and "Multiple liver metastases [largest 10cm] and a 20 x 10 cm abdominal mass". This came as totally unexpected news to both of us. I am not scared of dying (my mum had told me "never be afraid of death - our family comes from a long line of dead people"). It was a shock however - particularly as I had been feeling fine, wearing 36" waist clothes, and in the middle of an enjoyable holiday only a couple of weeks before! [See below]. 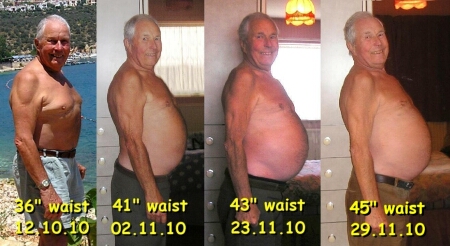 My GP arranged for me to see Dr Adrian Thuraisingam (Consultant: Gastroenterologgy) at Clatterbridge (Two weeks since I saw the original Doctor). The consultant ordered an "urgent" CT scan. The earliest was at Arrow Park - three weeks since the "clock started".

The CT scan confirmed Multiple liver metastases and an abnormal mass in the tissue covering the gut, so the GI consultant arranged an "urgent biopsy" and handed me over to the Dr Richard Griffiths: Clinical lead oncology consultant for "unknown primary cancers" at the specialist Clatterbridge Centre for Oncology.

I explained to him that I had trained as a Tool Maker but had spent my life as a Technical Writer (writing Operating, Instruction, Maintenance, Service and Repair Manuals for a wide variety of applications). I was fascinated by how things worked - and how you fixed them if they went wrong. I said that I wanted no "edited" versions of what was wrong with me, and would like to see the results of any scans or procedures that were to be performed on me.

He examined my "Mass" (now 43" and still growing) and explained that the CT-guided biopsy still had not yet enabled the pathologist to actually determined what the Primary Cancer was. It was essential he knew the Primary type before he could determine what treatment (if any) to propose. He explained to my wife and I that, regrettably, no matter what type it proved to be, it was aggressive, inoperable, had already spread to other organs. It was incurable and we should prepare for the worst. (In a letter to my GP he said that my wife and I had entered into these discussions in extremely practical terms, and that I was "incredibly pragmatic" about my illness and its eventual outcome !)

He was remarkably communicative (made my wife and I feel I was his only patient) made all phone calls (keeping me up-to-date) himself, gave me a full copy of the detailed CT scan report, and posted me a copy of his report to my GI consultant and my Doctor.

On the sixth week ("baby" now 45" girth and me looking almost full-term) the Oncologist phoned to tell me that the pathologist had determined I had "a rare form of cancer, unusually located on the front wall of the stomach". The good news was that, whilst it could not be cured, it COULD be treated with daily IMATINIB 400mg (Glivec) tablets.

I started my treatment on 7th December 2010 (35 days since Referral To Treatment clock started). I have some unpleasant side effects: VERY swollen legs/ankles/feet (Can't get my shoes on or legs down trousers): Daily nausea: And a persistent cough at night, but hopefully these will sort themselves out in time!

My wife, Meg, has been unbelievably supportive throughout (She even helps me dress as I can no longer see or reach my feet !). If you are going to beat an inoperable GIST then it seems a box of Imatinib and a supportive partner are almost essential.

All my GIST treatment has been at the excellent Clatterbridge Centre for Oncology NHS Foundation Trust on the Wirral.

Having determined my primary cancer was a GIST and having prescribed a daily dose of 400mg Glivec, Dr Griffiths handed me over to Dr Nasim Ali, (The Clatterbridge Consultant Medical Oncologist specialising in sarcoma, breast, and Gastrointestinal Tract cancers).

Apart from extremely swollen legs and nausea after meals, the main initial side-effect was Anaemia. To combat my low blood count [6.5] I was given blood transfusions (Six units in total by the end of my first 60 tablets).

My wife massaged my legs/ankles with E45 cream every evening - although painful, I am certain this was helpful. By March the swelling was confined to my ankles and feet. Her massage continues!

We usually book our holidays a year in advance. My consultant approved our going on our 14-day break to Tunisia on 16th March. I really needed a walking stick (and a pair of 10 1/2 shoes as opposed to my usual 8 1/2) at the start. My GP supplied 10mg Domperidone tablets (one 15minutes before each meal) which sufficiently combated the nausea to enable me to enjoy small portions of a four-course dinner.

By the end of our holiday [mostly spent relaxing but with some gentle daily walks] although my ankles were still sore, my cough had gone, I no longer needed my stick and my tumour was noticeably reducing.

On the last week of our holiday, by which time I had taken my 120th Glivec 400mg tablet, my tumour [which weighed over a stone at one point] had virtually completely gone. (see photo - same me, same shorts, but now aged 76). 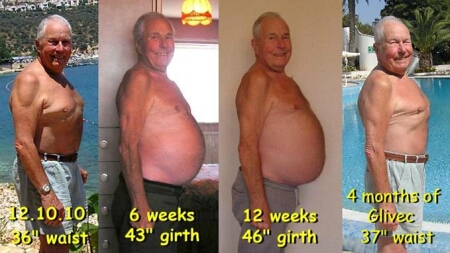 My CT scan on 31st March, compared to the original scan on 16th November, showed excellent response to the daily Imatinib treatment. Both the "abnormal mass" and the gist metastasis on the liver, were greatly reduced. So much so that I am now only scheduled for three-monthly clinic visits and CT scans. My blood count is now a respectable 11. The March scan shows that, with the shrinkage of the liver lesions, it is now apparent that the hidden (primary ?) site is outside the left lobe of the liver and within the peritoneum itself.

We have decided not to give in to GIST, but to live with it - we have already booked a return 14-day Tunisian holiday for March, another to Turkey in July, and a 21-day Kefalonian holiday for October - all in 2012!

Unfortunately when my wife and I attended the first of my 3-monthly clinic appointments in June (delighted to see that the Registrar had my 3-months supply of Glivec ready on the desk) we were shattered to be told that my previous week's CT scan had unexpectedly shown that my GIST was active again and that one of my tumours was already 21 cm across. My Glivec was to be stopped [after only seven months] and, after a week's break, they would try Sutent 50mg whilst I was still fit enough to possibly benefit.

I had truly accepted life with Glivec and its side-effects and the news "knocked me for six". .

From reading the Gist Forum, it would appear that, apart from Kim ("Kate's Story") the vast majority of gisters have had an operation to surgically remove their tumours. Sadly this is not an option in my case. On starting Sutent my new Baseline August 2011 CT scan showed "Significant hepatic (liver) and right upper quadrant disease which has progressed since June".

Quite frankly this second reversal of opinion left me completely devastated. From being told there was no hope [and arranging my funeral !] - to being told the Glivec treatment was going so well as to only need three-monthly visits - to being told my therapy had stopped working - was a real psychological blow to my confidence.

The first 28 days of my first Sutent cycle went surprisingly well. Meg continues massaging lotion into my feet and I have had no blistering problems. It was when I started my 14-day break that my tongue started to feel "scalded" and I completely lost my sense of both taste and texture. Food tasted so awful I didn't want to actually eat anything solid. I was continuously nauseous and vomited bile if I smelt food or swallowed even a pill !. Apart from nibbling a dry ginger biscuit to help stop my daily diabetic medication being "returned", I just drank milk and honey but eat nothing at all for nine days. My extremely supportive GP sent a nurse to give me daily Levomepromazine injections. This stopped the vomiting and enabled me to eat (but not enjoy ! ) small amounts of food - and keep my Sutent and other pills down. I don't know how my wonderful wife copes: She waits till the last moment to see if there is any food I feel like - but never complains if I simply can't finish it after she's cooked it.

My GP knows we are off to Turkey for a three-weeks holiday next week and has given me some Levomepromazine in pill form and some morphine: just in case I should need to combat any pain whilst we are away.