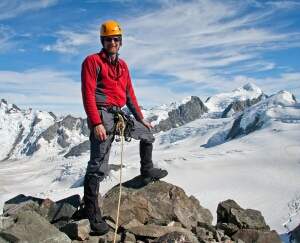 This is a deliberately upbeat story because, for now at least, I am one of the lucky ones.

Diagnosis of my GIST followed a holiday in May 2009 during which I started to feel very lethargic. Initial symptoms of breathlessness while walking uphill on Mt Etna developed to the point where even the hotel staircase was a struggle! On returning home, I proceeded rapidly from my GP to the local A&E, where various tests were followed by a blood transfusion to replace 2 units and counter my anaemia. Three days later, an endoscopy revealed a tangerine sized (7cm) tumour on the lesser curve of my stomach. So, at the age of 55 with no previous medical history, I was about to experience in-patient hospital care and some fairly major surgery.

Fortunately, I was referred to the Royal Marsden Hospital for surgery by Mr Jeremy Thompson in June and subsequent oncology care from Professor Ian Judson’s team which specialises in sarcomas. Recovery from keyhole surgery was thankfully rapid – I was home within 5 days and back at work after 6 weeks. Subsequent pathology results revealed a wild-type GIST with a fairly high mitotic rate. Quarterly scans for the first year were followed by 6 monthly scans in year two – all of them clear. Along the way, a bout of gastro-enteritis 5 months after surgery cost me in 5 days the half-stone in weight I had regained since leaving hospital! So it took almost a year to return to my original weight of 12 stone/75kg but I was fortunate to retain 95% of my stomach after surgery and I have not needed any on-going drug treatment so far.
The psychological recovery from any cancer diagnosis can be as challenging as the physical. However, right from the start my aim was to regain the way of life I had enjoyed before my illness. This included a return to various sports – squash, league hockey and occasional mountaineering. After a year at work and the move to bi-annual scans, I decided to take early retirement, aged 57. With the odds of relapse set for me at 55%, I wanted to make sure that time spent in good health would include some “quality time”, well away from work!

So, in the three and a half years since surgery I have been fortunate to travel extensively, regain my previous levels of fitness and step off the work treadmill, all without suffering further symptoms. In short, I have been very lucky – so far. I accept that with a GIST diagnosis, I am unlikely to be signed-off completely but annual scans are not a problem. I just have to be vigilant for any signs of relapse.

Needless to say, I am eternally grateful for the excellent care I received from staff at the Royal Marsden and the wonderful support of my family. The NHS – in which I worked for 35 years – certainly provided good quality care for a serious illness when I needed it most. This included access to specialist sarcoma treatment which only the NHS can provide.

The one other point I would make with the benefit of hindsight is to keep looking for the positives. Initially this can be really difficult as you work your way through the shock of diagnosis and the anxieties about treatment and post-op recovery. But regaining control of your life is a powerful motivator, along with having targets to aim at. Standing on top of  the mountain in the attached photograph was a very rewarding moment after the turmoil of the preceding 18 months.