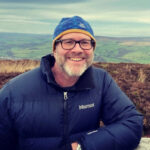 “My story about GIST cancer and how I am fighting it” January 2021.

My advanced GIST sarcoma (Exon 11 positive) is in the soft tissue of my abdomen, a rare type of cancer and it is known as sarcoma. There is currently no cure, where surgery is not possible. Any treatment you get is to “prolong life”. I have three children, was working as an environmental consultant, just about the get married on the 4th July 2020 (unfortunately postponed due to Covid19) and I’m now heading towards my 55th birthday facing some uncertainty.

I only knew since my fiancé had given me a big nice hug during the night and I had pushed her away. Not perhaps the best response, I thought. It hurt. Oh dear, ahh, what was that? Something in my stomach or middle somewhere. I then pressed my stomach in with my hand but it didn’t move, normally it would go in a long way, there was something hard pressing out, something firm. So, I went to the doctors, Monday morning, 13th July 2020; for the first time in a long time. I’m never ill, I said to myself, I’ve never had a day off work, after way more than 30 years. My GP examined me, ordered bloods and gastroscopy at the Airedale hospital.

My symptoms were getting worse. I wasn’t sure if I could keep working. I was literally blowing up like a balloon, the thing pushing into my other organs, I was managing the pain quite well, but it was becoming tough. Symptoms included significant weight loss, pain around the lower back and abdomen, fatigue, temperature spikes and sweating, anaemia (low iron levels in the blood) breathing problems and nausea such that I couldn’t eat or keep anything down.

Gastroscopy was undertaken on 5 August 2020. It was uncomfortable but I coped well. The results of gastroscopy (camera in the stomach) were minor in retrospect. The surgeon who did the Gastroscopy was clever and even took some multiple biopsies; the stomach was fine and no signs of cancer in my stomach, but he found some pressure from outside of the stomach and he ordered an immediate CT scan.

Wednesday 12 August CT Scan (Computerised Tomography). So, now for the results, over the phone from my GP. “Are you sitting down…? its big”, she said, “it’s very rare and it’s interesting to come across it once in my career, you have a tumour or mass, 22cm – it’s the size of a netball in your abdomen”. “Also, your blood markers for cancer are elevated. It’s not a definitive test, however”. I was quiet on the end of the phone.

After that I had an appointment on the Thursday 27th August in hospital St James’s, Leeds. This hospital had a specialist sarcoma unit, so I was in the safe hands of experts. So, diagnosis had come since the 13th July to the 27th August, around six weeks. I’ve got a GIST (Gastro-intestinal Stromal Tumour). It’s not in my stomach but connected somewhere between the top of my abdomen and the bottom, possibly to the outside of my stomach. They are caused by a gene mutation and the cause is not really understood or known.

I went into hospital on the Friday 28th August. I was in hospital from then until the 10th October, this was six weeks and one day. Biopsy 1st September. Samples were taken from the GIST by sending a camera and equipment into my stomach via my mouth, punching through the stomach wall and into the GIST. This was not pleasant and I felt awful afterwards. I had a bad reaction to the biopsy, felt lousy and was put on antibiotics. I had a bacterial infection in my bile duct and also had some form of pneumonia, also it might have spread the cancer around. I had problems breathing, pulmonary oedema, chest X-rays, CT and ECG. Fluids building up in lungs and legs and groin. Painful to sleep.

My operational plan kept evolving as knowledge was gained. One option was to operate straight away to remove the GIST, spleen and half my stomach and half my pancreas. It was a big operation and the recovery period should not be underestimated. Another option was to wait for the results of the biopsy, ensure I could take the drugs for the targeted cancer therapy, this required the results of the pathologist’s report which would take four or five weeks to get done. In the meantime, I was struggling and my symptoms getting worse each day. Something had to be done and it felt like a race against time. A third option then thankfully came into play, an operation to drain fluids from the GIST so as to reduce its size and reduce its impact on my body. Luckily my consultant surgeon had booked a slot with the best surgeon to perform this operation just a week after my biopsy. This drainage operation would then be followed by targeted therapy. Any possible operation to remove the GIST could then wait until I was fit enough which could be nine or 12 months later.

This seemed like a life-saving operation for me and I think it was. On the 7th September an operation was undertaken to drain fluids from the GIST. A stent, a metal tube was put in to drain the nasty cancerous fluids into my stomach. Some three to four litres were drained off. It was quite painful. So I was pondering what four litres was in relation to a GIST of 22cm and I estimated it to be around half of the size of the GIST, so hopefully it had shrunk down and allowed me to breathe more easily and also relieve the pushing from the GIST on my internal organs.

Great news, the long-awaited pathologists report had recorded that my GIST tumour was compatible with the drug “Imatinib” a drug that kills some types of GIST cancer cells. I started taking Imatinib on the 2nd October 2020. I decided to dub this drug Imatinib the “wonder drug”. So, I hope it works and shrinks my tumour down over the next year. I’ve heard the percentage shrinkage of around 50% can be achieved which means any operation has more limited damage to the body. I’m on Imatinib tablets for the next nine to 12 months, they could operate before if safe to do so and beneficial for my wellbeing.

Side effects, of the Imatinib - I think I have been lucky, I have escaped anything serious, apart from fluids getting into the wrong places such as ankles and legs and groin. If any, my side effects are sensitivity to hot and cold in my hands and feet, hot sweats, some upset stomach, some muscle cramps in hands and stomach. Taking Imatinib in the evening can reduce day time side effects.

Food; I was told to pump up the calories and proteins. My fiancé and my mum cooked me up big high protein dinners at lunch time based on the sloppy or soft diet where everything was pureed. Also, I would have hot puddings with custard. I was slowly building myself up. Supplements to my diet included a juicy drink that I would take several times a day to boost my energy levels. Each one 300 calories and quite a bit of protein. Exercise took the form of walking. I decided to go out for a walk every day. This became a regular thing I could do well. My photo shows me enjoying myself on a “walk with a friend”.

I had a CT scan on the 15th January 2021 and I’m waiting for the results. I’m in the same boat for the next three months when I may have another CT scan and a call with my oncology specialist.

The bucket list: I made a list of things I’d like to do. Funnily enough work wasn’t on my to do list, I have other priorities now like fighting the prognosis and adapting to my new future living with GIST. I’d like to get fit enough to enjoy spending time outside, spend time with my fiancé and my children, go skiing and climb some mountains again, but I’m not sure if or how far I will be able to do that, owing to lower energy levels. I’d like to be able to play drums again and make music with friends. When we’re allowed, we can do bigger walks, perhaps in the Dales, The Lake’s, Wainwrights and Scottish Munros, who knows. I’m getting married in the summer of 2021. Hurrah. I’ve now moved in with my fiancé and her children, so plenty of exciting things to look forward to...