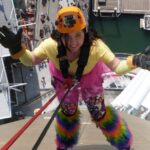 In 2014, I began having recurrent abdominal pain, initially putting it down to being female and "time of the month", then blaming things I'd eaten (too much, not enough,, too much fizzy drinks, not drinking enough and being dehydrated). After 3 months (September 2014),I decided to speak to the GP. Thankfully, he sent me for an ultrasound scan.

The scan came back as showing a mass, which was initially described as "just a neurofibroma" (I also have a genetic condition called Neurofibromatosis). I was referred to a local surgeon, who requested a CT scan. This showed the "mass" was possibly on my uterus/ovary, but still wasn't fully clear what it was. He then referred me for an MRI. 3pm on New Years Eve 2014, he called me at work and said it still wasn't fully clear what we were dealing with. The MRI report stated "no secondary factors to suggest malignancy". He gave me the option of surgery by him, although he said if it did turn out to be a gynae issue, he couldn't guarantee he could complete the surgery and may need to get the on call gynae team during surgery. Second option was to be referred to the Sarcoma team in Leeds. I asked for a few days to think over what he had said, finally deciding to see the team in Leeds for a more detailed look. Another CT scan, and a biospy showed the neurofibroma/mass to be a GIST (gastrointestinal stromal tumour), a stupidly rare form of cancer, and as I like to be extra awkward and special... I had Wildtype GIST, making it even more rare.

The team at Leeds performed surgery in March 2015 to remove the tumour (Tarquin) and so far, things are "OK". I continue to be monitored, and have recently gone from twice yearly scans to yearly scans, with the knowledge that this can always change back to more regular scans should Tarquin reappear.

If you have any changes in your body, speak to your GP. It possibly isn't anything to be concerned about, but don't be afraid to get things checked.