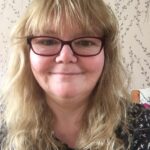 Hello, my name is Jane Lochrie.

For as long as I can remember I’ve always been a little plump, constantly tired and sleeping.

It was a standard joke about “how long could Jane stay awake?”.

As life went on; career, marriage, children…. there was always an excuse about why I was fat. Everybody; doctor, friends, all said I was either fat or pregnant!

I had many visits to the GP from 2014 about being fat and unable to lose weight.

Somewhere through the diagnosis process somebody thought there was a tumour on my right ovary, nobody listened to me when I complained about my tummy not feeling as if it was part of my body.

February 2016 - I visited a doctor, she complained to me about being 20 minutes late when it was actually her and she was taken aback when I corrected her that I was on time. I had two ailments and she said she would only look at one. I answered “I have one body with two complaints, One being a cough and the other complaint was my fat belly". She agreed that I was fat and advised me to continue exercising and dieting.

More dieting… no chocolate, no alcohol, more exercise and I was even more tired, life was s**t and really hard because nobody listened to me about my tummy not feeling part of my body.

Gym in the morning at 6 a.m., home for 7 a.m., Breakfast was a 3-egg omelette, cup of tea and couple of biscuits. Within minutes I was I was instantly starving, I ate fruit to see me through to lunch time. Lunch at 12pm I ate two filled rolls, crisp, bar of chocolate and I was still hungry. More exercise at the gym, I called my tummy ‘bowling ball’ and everybody asked me about being pregnant!

I visited a different GP 6 weeks later, I was so uncomfortable, with this thing stuck to the inside of me. The different GP took blood and referred me for an ultra sound. She felt around my tummy, core area and told me she honestly didn’t know what it was. Following the Ultra sound was a CT scan. I walked the Glasgow Kilt walk 26 miles, mind blown, how could I walk with “bowling ball”, stay awake for 8 hours with no naps. I thought the walk would somehow help me; I knew that no matter what “bowling ball” was, only surgery would be able to fix my tummy.

The CT scan showed the growth was on the right ovary, I was mega confused. The GP referred me to a gynae doctor, I knew that the CT had been taken and I phoned the central appointment line for the next available gynae doctor. This doctor was at Monklands hospital in Airdrie on the 5th May 2016. She told me “yes it is defiantly on the right ovary”, she advised me to organise my affairs and hopefully I would see Christmas and not to bend in case I burst the tumour”! Following this I got to speak to the CNS for ovarian cancer, I had started a period! and then 10 minutes later this nurse phoned me back and offered me a surgical slot for the following week.

May 2016 was the surgery day, at the gynae ward in the Glasgow Royal Infirmary. Feeling nervous but happy I just wanted “bowling ball” out– there was a nurse and an anaesthetic doctor, they were funny and that me helped to relax. The best feeling after the surgery was feeling my stomach area and it was flat, there was no bowling ball (yeah!) .
I later learned that when during surgery they found the tumour growing out of the stomach, they called specialist Gastro surgeon Peter Chan to the theatre. I was lucky, the tumour was removed intact – two people had to lift it out – it weighed 4.5 kilos and measured 40 centimetres! The tumour had metastasised.

In the hospital that weekend many staff approached and told me they were not involved in my care but the CT scan showed that the tumour was on the ovary and what a surprise that it was on the stomach.

I went home on the Monday, and for that first week I totally relaxed and enjoyed being with my family.

13th June 2016 – I visited the Beatson. Dr Cowie was really nice and we discussed getting stronger and arranging a PET scan because the original scan told them nothing. PET scan done, no regrowth – I felt comfortable to return slowly to work. Being self-employed it was important to save my business and pay the bills. From the second week onwards, I worked every day and walked more and more, I was determined to be strong so cancer didn’t win.

PET results where negative for any regrowth I thought I was super women!. Sadly, in the September tumours started to grow again, I called them "naughty sprinkles". When I was at the gym lifting weights I visualised squashing the naughty sprinkles.

I was prescribed Imatinib, had no side effects at all and the three tiny tumours grew. Dr Cowie was saying ‘this was a good thing’. At this point I did not know about the BLU 285 trial which was in its first phase – I didn’t qualify at this point as the tumours had to be more than 10 milometers.

17th March 2017 – At my appointment with Dr Cowie we talked about the possibility of the trials and when the tumour grew to 11 millimetres, it was recommended that I could go on the trial which was now at phase two. The drug specifically targets the mutation I had (PDGFRA D842v) and there was no other drug or treatment available for me. It was a no brainer, for me, family and science, I wanted to do it.

I had two visits to the Royal Marsden Hospital in London, lots of tests and discussion about side effects and was advised to avoid homeopathic medicine, St Johns wart, grapefruit, Seville oranges and to limit use of paracetamol. For the best results the trail drug is taken every 24 hours and you are not allowed to eat 2 hours before and 1 hour after the drug dose, in this 3-hour window you can only drink water.

End of November 2017 - CT scan says there is no tumour present, the study drug has worked!

The first year on the trial, I visited the Royal Marsden in London once each month with fantastic results, bloods good etc and still no regrowth of the tumour. Side effects of the trial drug at this point were watery / swollen eyes, the swollen eyes deflated with time, the drug dose was lowered from 300mg to 200mg.

After cycle 13 the appointments were extended to every 3 months and the results were still clear. The trial drug was named Avapritinib.

October 2021, I’m still clear of GIST cancer which is the most amazing feeling.