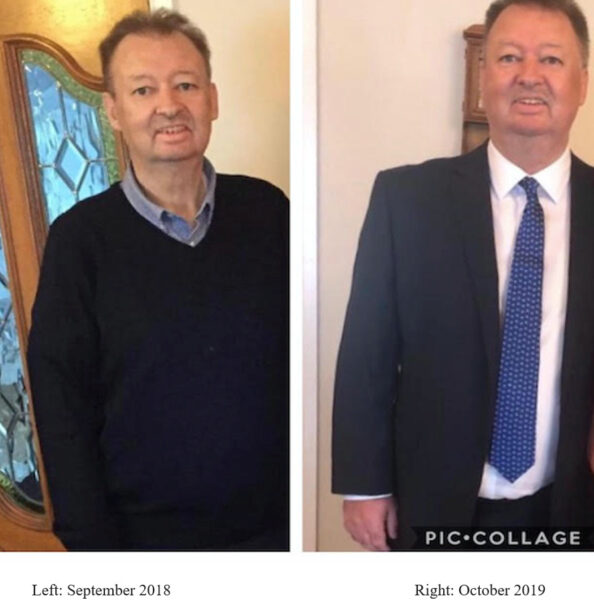 My name is Brian, I am 59 years of age, married with two children and I am from Dublin, Ireland.

In March 2018, I noticed I had a very bad cough (similar to a smokers cough) and my wife noticed I was losing my appetite. Furthermore, I noticed when I was lying on my back at night, my stomach was becoming very hard, however, I was not receiving any pain from this. I was then informed by friends that I was starting to lose weight, it was then I decided to go to my GP in April 2018, mainly because of the hardness on my stomach at night. He took the decision to send me for an ultra-sound scan in The Hermitage, Dublin. My GP then informed me they had discovered a large mass on my pelvis and that it had potentially metastasised. I was then referred to a specialist for observation, which then resulted in me undergoing further investigation at The Beacon Hospital 4 days later (1 May 2018).

At The Beacon I underwent tests which included a colonoscopy, endoscopy, CT scan, chest x-rays and finally a biopsy of my liver. After all the tests, my consultant told me he felt I had a tumour originating from my appendix that had metastasised to my liver. He then informed me a week later I would be prescribed a treatment in the form of tablet for my condition and I would not be undergoing your standard chemotherapy. I was then passed on to an oncology team and an appointment was made for 7 June in The Beacon Hospital. The next month saw my condition deteriorate quickly with new symptoms materialising. Firstly, I began to lose more weight and then I had blood in my stool, vomiting, diarrhoea, high temperature, fatigue, jaundice colouring and discomfort on the right side of my stomach.

On 7 June I met my oncologist, where he informed me I had a 23 centimetre tumour in my small bowel and that the cancer had metastasised to my liver, leaving 6 small tumours. He told me this was called GIST (Gastrointestinal Stromal Tumour). Moreover, he stated to me I would be administered a tablet named Imatinib (Gleevec 400mg) and this would be sufficient to treat the primary tumour in my small bowel and the additional tumours in my liver. I was informed this was a very rare form of cancer and he only treated about 20 cases a year. He did tell me I would eventually be able to go back to work, which gave me great confidence. He then admitted me to the hospital straight away that day as he thought I did not look well at all. They had discovered I had sepsis and I spent four days in the isolation ward, were I was put on antibiotics.

On 12 June I started Imatinib because I still had blood in my stool because the tumour was leaking at this stage. I was discharged from hospital on 19 June. Throughout the next few weeks all I did was sleep and I was constantly vomiting and had diarrhoea.  I very rarely got out of bed and it was in this period I lost a substantial amount of weight. I was admitted back to The Beacon on 6 July because of a bacterial infection. On 12 July I had a CT scan wherein they discovered my tumours had shrunk slightly, therefore, they knew the treatment was working. However, Imatinib did come with a lot of side effects. I was in and out of hospital every two weeks for the rest of the summer because of infections due to the drop in white blood cells caused by Imatinib. My side effects included more weight loss, nausea, skin rash, impaired vision (2 months), bed sweats, fluid retention, vomiting, diarrhoea and tiredness (a lot of time spent in bed). In the meantime, I was prescribed medication for anti sickness, pain and acid reflux. I also received supplements to regain weight due to the loss of my appetite.

From July to the end of September I received 12 blood transfusions and one iron transfusion, because Imatinib causes low blood counts. During this period the tumours were continuing to shrink. I was of the view that I would have to live with the primary tumour in my small bowel as it was so big. This was a time of great uncertainty for me.

In September my daughter returned from Vancouver, Canada due to my illness. Also, in September my son graduated from university, which was a great day for me as I was unsure whether or not I would be well enough to attend the ceremony. Unfortunately, I was admitted back to The Beacon two days after the graduation. After I was discharged from hospital at the end of September my body began to get used to Imatinib and I got a lot stronger and I got back eating better. Everything was going well and I was getting stronger until 25 November.

I began to get a lot of pain in my stomach and eventually I was rushed to hospital on 27 November where I had a procedure called a bowel washout. They had discovered I had an abscess on my small bowel due to Imatinib shrinking my primary tumour and therefore causing inflammation. I spent a week in hospital. Two weeks later I was back in hospital, where they noticed I had developed a fistula on my small intestine. A fistula is an abnormal connection between two hollow spaces (technically, two epithelialized surfaces), such as blood vessels, intestines, or other hollow organs. Fistulas are usually caused by injury or surgery, but they can also result from an infection or inflammation. I underwent a course of antibiotics for three weeks and in the meantime I could not eat to give my small bowel a rest. My oncologist told me that this was unusual and that I was unlucky.  That was a tough period for me as I was in hospital for Christmas and New Years. Upon being discharged in early January I began to get stronger again and enjoyed doing the simple things in life.

The next few months saw me return to hospital once a month to check my bloods and every three months I would get CT scans which showed my treatment was continuing to work. My oncologist had told me that the tumours in my liver were now cystic. At this stage I still had some nausea and I my eyelids were becoming swollen especially in the morning time due to Imatinib. Fast-forward to July where my multidisciplinary team decided that my primary tumour was to be removed as it had shrunk from 23 centimetres to 2 centimetres. It was now viable to remove the tumour. I successfully underwent surgery in August and I spent seven days in hospital. I then recovered at home for a month and then I began to get back to enjoying my life again, playing golf and returning to my role as chairman of my local football club.

In September 2019, I returned to the hospital to see my oncologist, where he told me my CT scan showed my small bowel was clear and that the tumours in my liver were still cystic. I continue to take Imatinib every day just before I go to bed. I feel this is the best time for me as Imatinib can cause tiredness, therefore I can sleep through this side effect. I return to the hospital once a month for my bloods to be checked and every 3 months I have a CT scan. My oncologist said he will monitor me every three months and that I will be taking Imatinib for the foreseeable future.

In October 2019 my son attended a GIST Cancer UK patient meeting on my behalf to get a greater insight into this rare type of cancer. This was very beneficial for me and they are a great resource to anyone suffering from GIST. My son also gained knowledge from various research papers, but a great resource was the GIST Support International page on Facebook where patients discuss their experiences with GIST. My son has only spoken to five patients from Ireland on this page which really highlights how rare this form of cancer is.

I must make everyone aware that throughout the last two years it would have been extremely difficult to get through this period without the consultants, surgeons, doctors and nurses who looked after me. Also, I cannot forget what a pivotal role my family, friends and the local community have done for me. I have now put on the four stone in weight that I lost at the start of my diagnosis and I am enjoying life.

The world is a better place for having this miracle drug Imatinib made available to people suffering from this disease. I am a perfect example to everyone that this is truly a magnificent cancer drug. I am now at the stage where I can look forward to my daughter’s wedding in September.