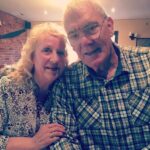 I am 75 years old and was diagnosed with a Gastrointestinal Stromal Tumour (GIST) May / June 2021. My tumour is 21cm long by 21cms wide.

I started experiencing problems at the end of March 2021 and  was having bowel issues and not going to the toilet. My wife phoned the GP which led to a telephone consultation where I was told it was constipation and given some powders to use to help, this was all over the phone. Over the next four weeks my wife phoned each week as the powders were not working and was told the same thing, to keep taking the powders.

I am a diabetic and during this time when the above was happening I had my routine diabetic blood tests. These came back a week later and showed that I was anaemic. This resulted in another set of blood tests showing that my haemoglobin had dropped further. This then resulted in me actually seeing someone to get examined – this was 5 weeks after my first telephone call with the GP. The doctor examined me and found a lump and hinted it might be worse case scenario. Over this 5-week period I lost a lot of weight and started to look very ill, my stomach started to get very bloated, and I looked about 9 months pregnant!

I then had a CT scan at our local hospital which is Addenbrooke’s hospital. We hadn’t got the results after a week of the scan so my wife phoned our GP’s another 3 times before we actually got the results and we were told they could see something on the scan. We then went for a biopsy down the throat which took another week. Whilst I was having this biopsy Doctor Carrol explained he thought it was a GIST but wanted to make sure.. This was the first time anyone actually spoke to us about what was going on. Dr Carrol then passed my father’s case to Dr Ramesh Bulusu who is a GIST expert but even more luckily for us he works at Addenbrooke’s.

I had my first consultation with Dr Bulusu on the 8 June who showed us the scan and advised the reason it was getting bigger quite quickly is because the tumour had a gene defect, he did give it a number but I cannot remember what this was now. I started on 100mg of imatinib which was then upped to 200mg a month later. I also had a blood transfusion around 15 June as my haemoglobin levels were still falling.

There are signs of shrinkage as my stomach has started to go down and I am not in as much pain as I was. Haemoglobin levels are staying the same and we are waiting for a scan the middle of this month and then a consultation with scan results with Dr Bulusu at the end of this month.