A Gastro-Intestinal Stromal Tumour is rare, but you are not alone!

This year I attended the 8th annual "New Horizons in treating cancer" conference in Vienna. It was the first conference I have ever been to that deals with GISTs and I thoroughly enjoyed it!

On the first morning we went into a small room. Well I'm saying small but there were at least 40 people in there. Plus people with cameras and interpreters and wiremen.

The Speakers in this session were:

I learnt that there are around 5000 to 10,000 new cases of GIST every year. Many people can live with micro-GISTs all their lives and not even know but in GIST patients something must have been triggered to cause the tumour to become aggressive and grow. Some if these factors are BRAF mutations or insulin related growth.

It was a very informative 10 minutes which also told us about some of the pros and cons of imatinib, such as people who have had a complete gastrectomy have a harder time trying to absorb imatinib. We also learnt that if your tumour is growing sometimes a "watch and wait" method should be adopted before rushing into major surgery.

In another session we learnt about a video site called Oncology Tube. A brilliant invention where people can upload videos to do with cancer or conferences and seminars they have been to and share them with the world.

I listened to some people talking about organisations they has set up in their home countries. The most inspiring people were Helga and Marti from Switzerland. Helga was married to the late Dr Ulrich Schnorf who was diagnosed with GISTs and died last year (not GIST related). His dying wish was that others in his position had people they could lean on. So Helga, along with Marti, started to go about setting up a GIST Support of Switzerland. They aimed to have doctors, patient representatives and other GIST patients. They managed to set up the foundation and got it launched earlier this year. Helga was so strong when telling everyone what her husband wanted and how she misses him.

I also learned how more research companies are trying to get patients involved with their research as the patients give useful advice which benefit the research. The patients are the only ones who fully know what living with cancer is like. The researchers will also get more reliable results as the focus group who will be using the treatment will have been involved in its manufacture.

I also found out something which is personal to me. Both my parents are blood donors and I always wanted to give blood- especially after receiving blood transfusions. I wanted to give back to people who donated blood to me. However I realised that GIST patients are not allowed to donate blood. This could be because they are currently on treatment and have it in their system or they have been and there is traces in the blood still. 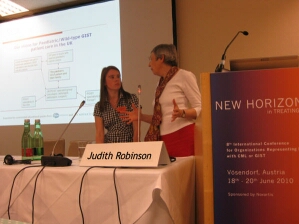 Judith Robinson and I gave a talk in front of everyone involved with the GIST side of the conference. We spoke about our "adventure" into finding Pediatric GIST specialists in the UK and how we were doing it. We also designed a poster to show everyone. It tells you about what we are wanting and what we have already done. We found out on the Sunday afternoon that out of maybe 30 posters our one was chosen the winner. People voted on which poster they thought was most effective, caught your eye and was overall ours was chosen. I am not 100% sure what this means but I am honoured to have had so many people vote for us and hopefully this is a step in the right direction for our journey into finding a specialist.

We also watched a video all about the amazing drug that is Glivec. It had stories from patients whose life was almost at an end and Glivec turned this around. I realised that although Glivec didn't work for me it has literally been a life-saver for so many others. It gave hope to them and their families. I have tried to attach this video here- if it doesn't work let me know and I will find some other way to send it to you all.

On the trip I met some very inspirational people. Some people had relatives come for them as they were simply to sick or because they were too busy enjoying their lives. I found it very encouraging to talk to people who have had a worse time than me who still get on with life. It made me feel more reassured that if I do have to have further treatments , other people have gotten through it and so will I. I met families of GIST patients and got a greater understanding of how hard it is on them as well as the patients.

I feel very fortunate to have had this experience and now feel as if I have a better understanding of this crazy cancer world. I also was able to share information with my parents which helped us understand everything easier. I heard of so many drug trials and research programmes going on that I feel more confident that we will not run out of options and near in the future we will beat this cancer once and for all.