A Gastro-Intestinal Stromal Tumour is rare, but you are not alone!

Over 80 patients carers and interested professionals attended this event. The main presentation was by Dr Michelle Scurr, consultant oncologist at the Royal Marsden hospital. The planned presentation and workshop on the work of the Clinical Nurse Specialist had to be curtailed to just the workshop, because of a staff shortage at the Marsden. The meeting ended with a report from the Chair of GCUK.

Getting The Best Supportive Care

Michelle began by saying that this is what everyone present was doing by getting involved, finding out about their illness and learning about the best treatments available. Every GIST is different and every patient is different, so although there is a general pattern for the treatment pathways available to GIST patients, the actual care we get should be tailored for our individual needs.

To get best care, we need an informed patient, an expert oncologist and MDT, and a good NHS!

Michelle continued by giving a brief overview of GIST. (Click on each slide to see an enlarged version.) 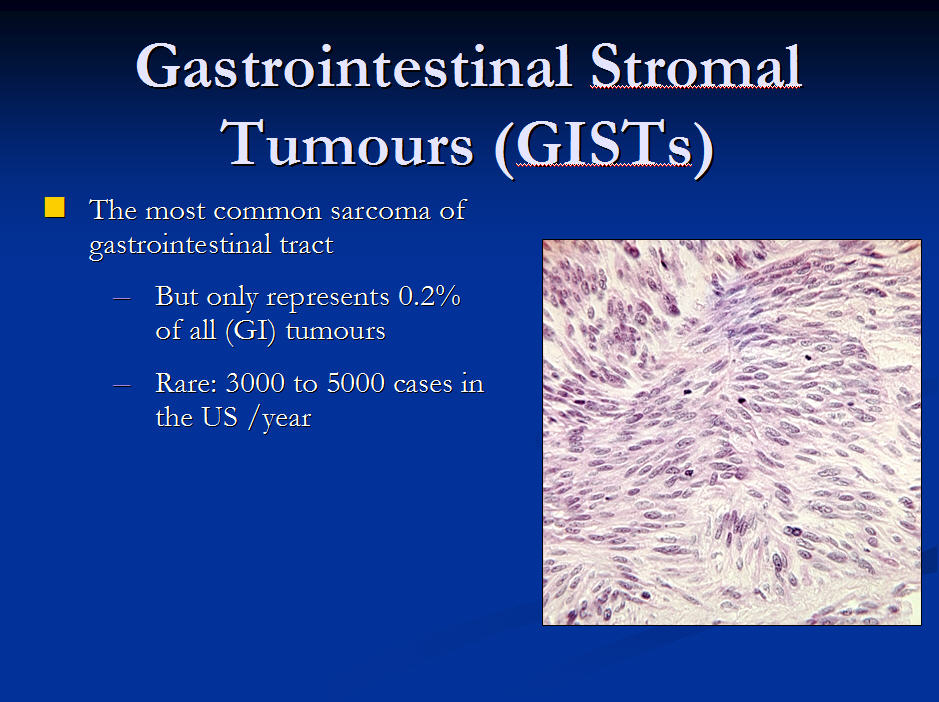 The best estimate of the number of new cases diagnosed in the UK each year is about 800, but we do not really know. Because it is rare, it is often not diagnosed easily. GISTs may be quite big without giving any symptoms, and this does not help the diagnosis either. 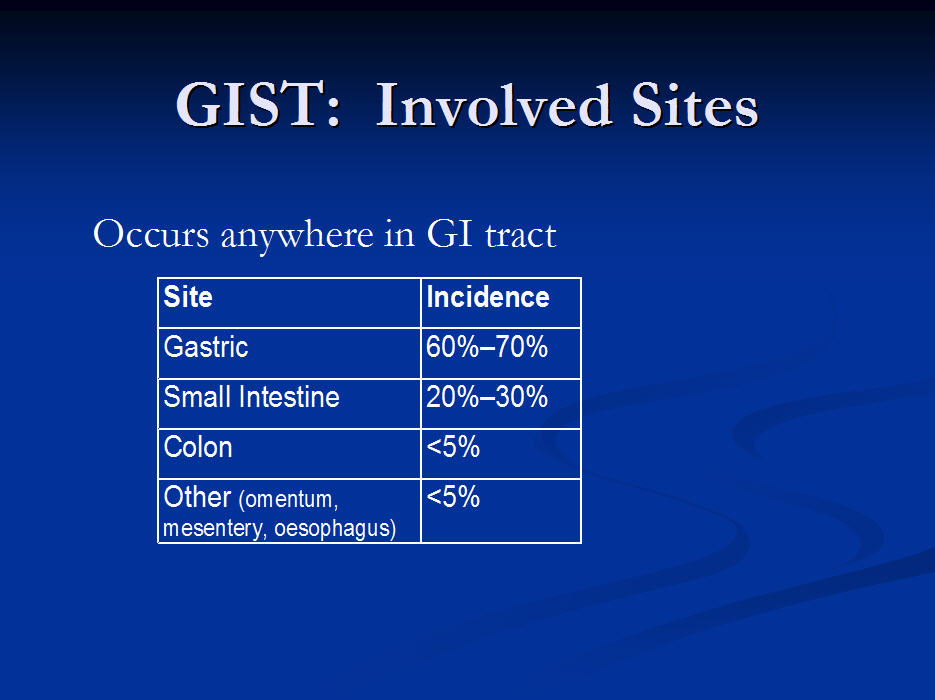 These next two slides show a stained pathology sample of a GIST tumour and the molecular mechanism by which the disease spreads. 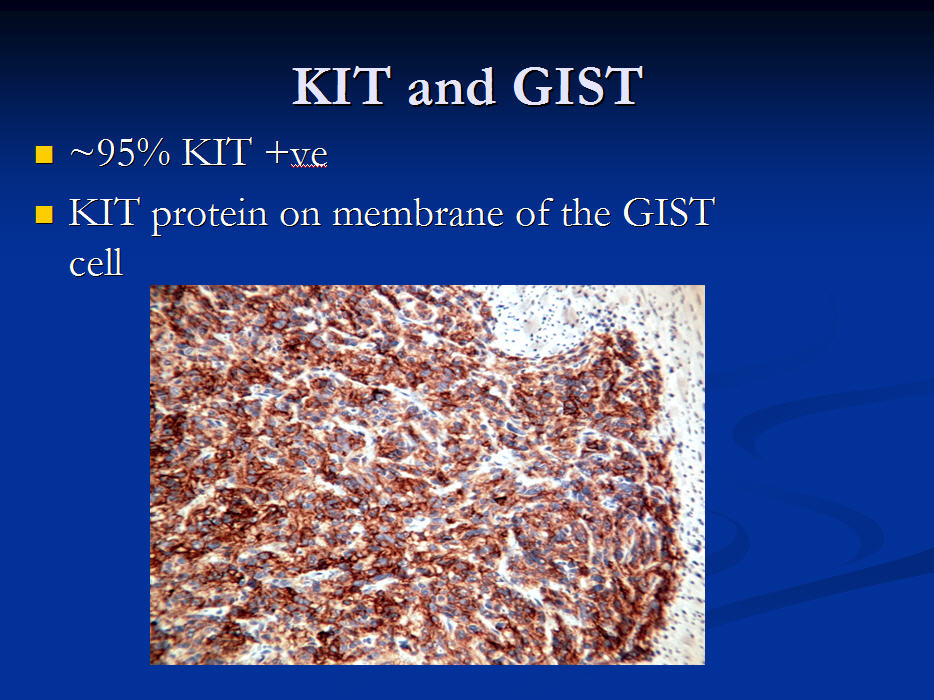 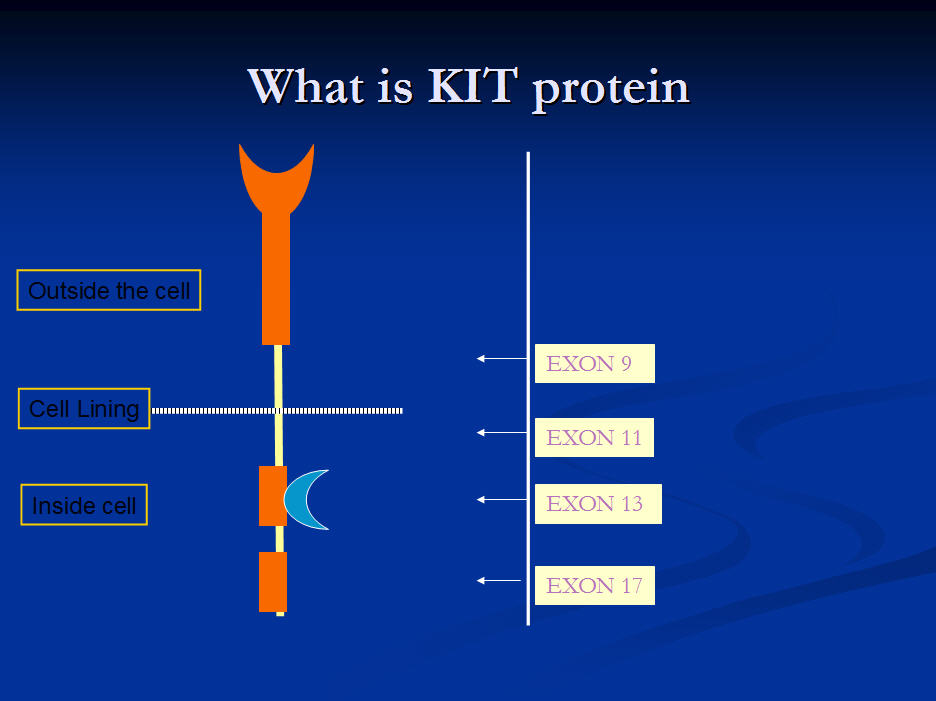 Genetic mutations of the KIT protein gene occurring in GIST. 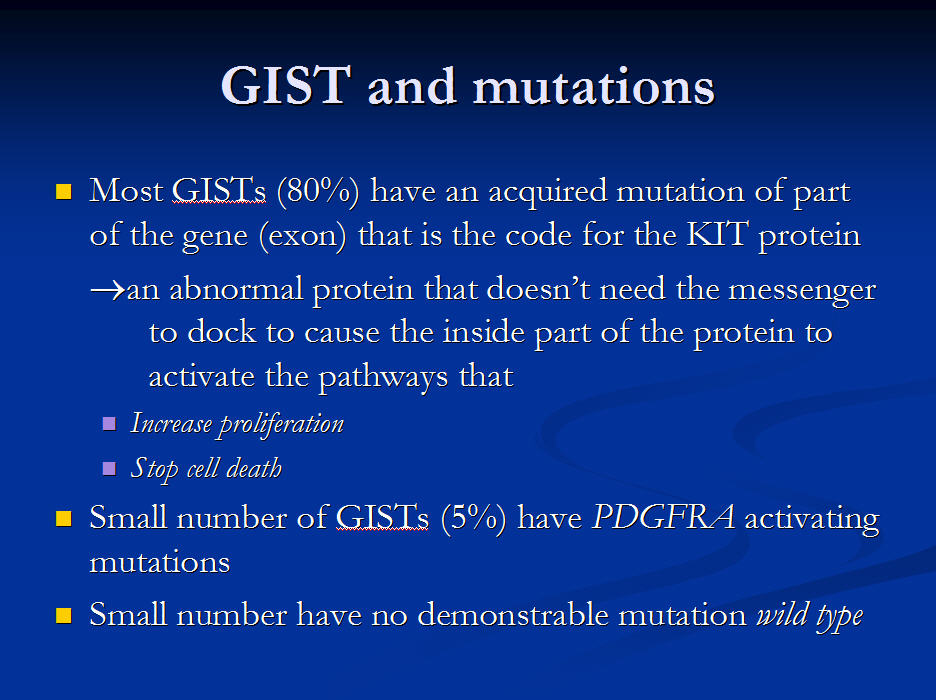 This slide shows the relative frequency of the different GIST exons. It shows that a mutation on the Kit gene at exon 11 is by far the commonest cause of GIST 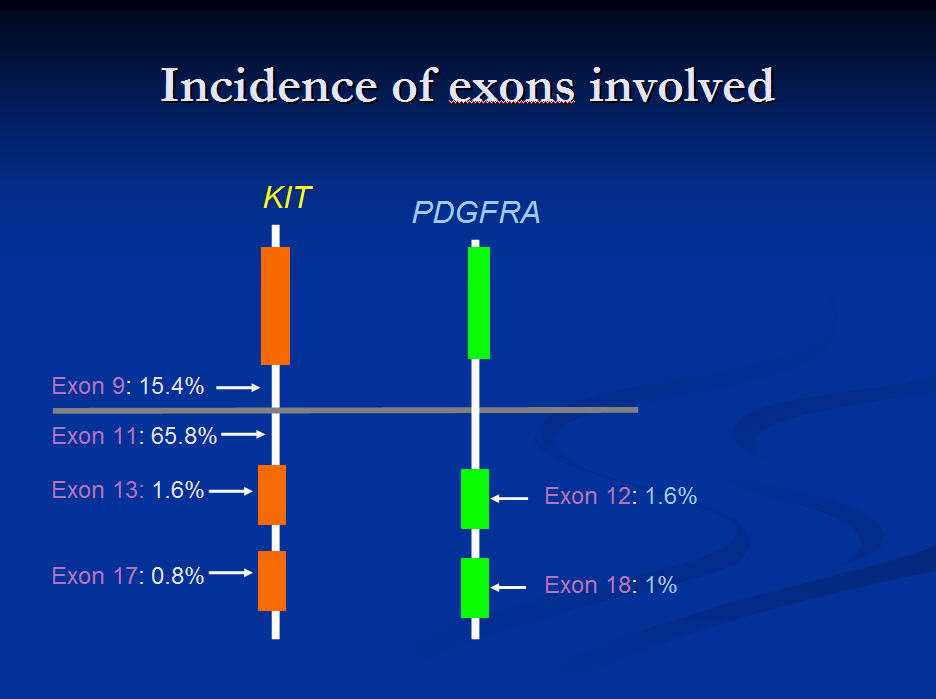 When GISTs are found they may be grouped in two ways: whether they give the patient any symptoms, and how easily they can be treated. Small GISTs can almost always be removed with surgery. Larger GISTs can probably be removed, but the surgeon may decide to try to shrink them first to make life easier for him and his patient. GISTs which have already spread, or have become very large will be treated with imatinib. This can sometimes enable the surgeon to remove them later. 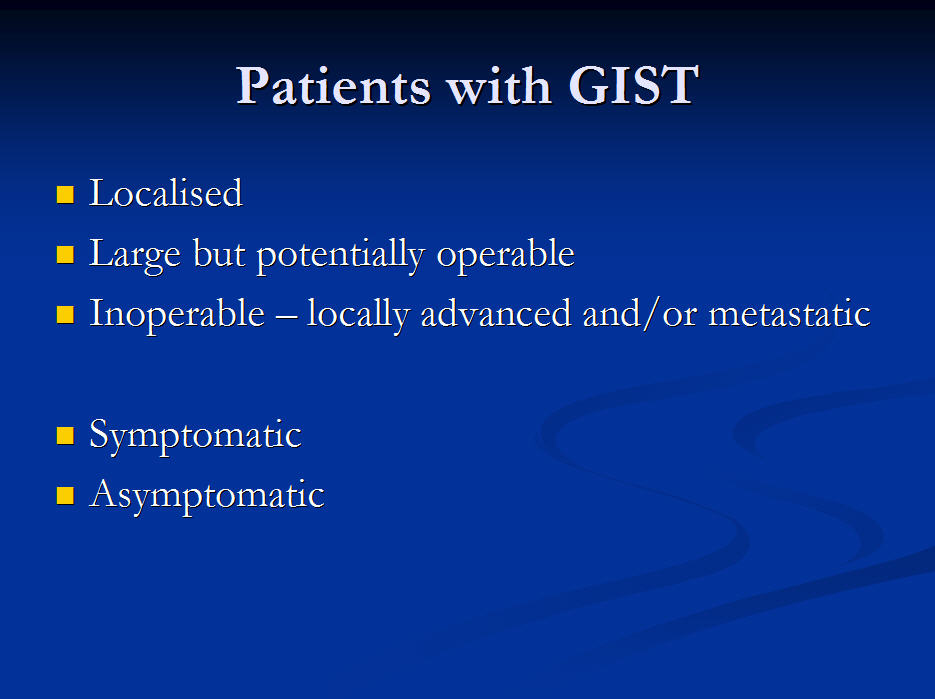 High risk tumours should be under a Multi-Disciplinary Team!

The simple removal of a small GIST, being followed up by the surgeon or the medical oncologist alone is probably fine. However if the GIST was large, high risk, or metastatic, then the patient should be in the care of an MDT (Multidisciplinary Team). This may mean referral to a major sarcoma centre where such an MDT operates. Often of course GISTs are removed as an emergency because of a bleed, or are discovered accidentally when you are having surgery for something else. 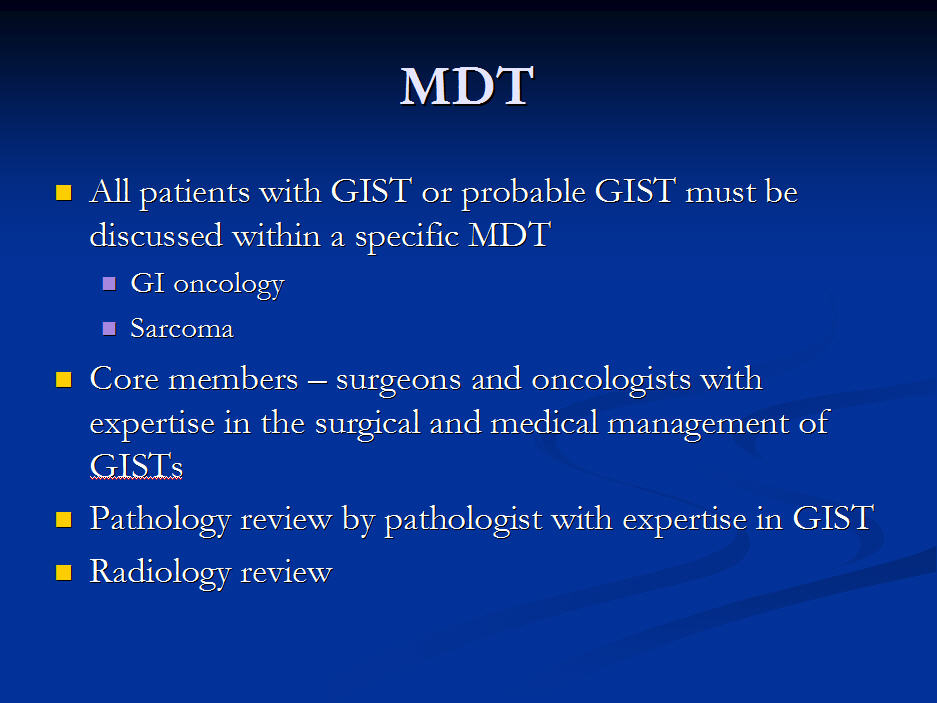 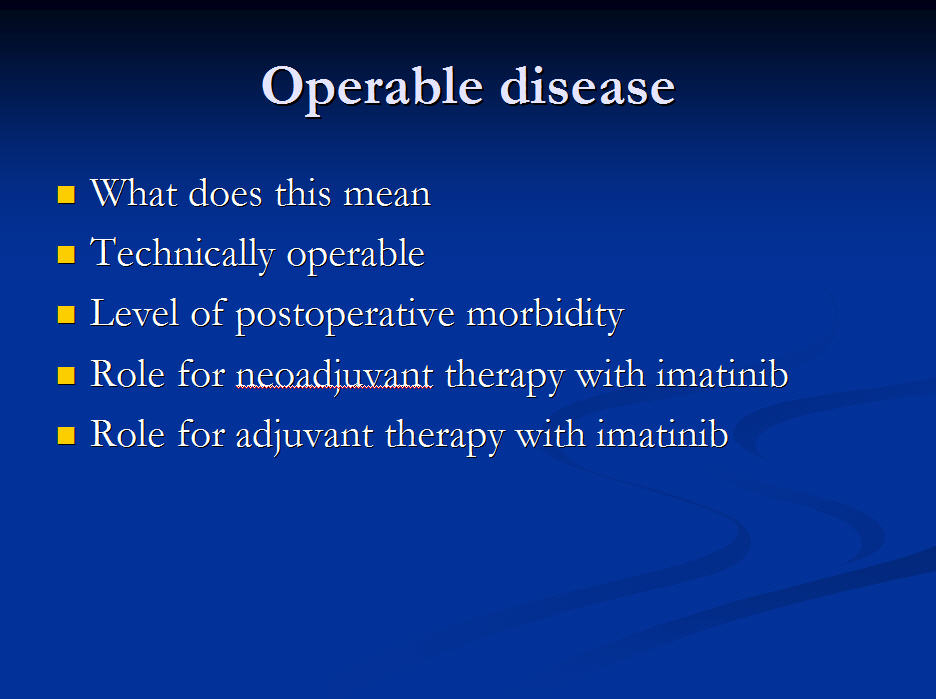 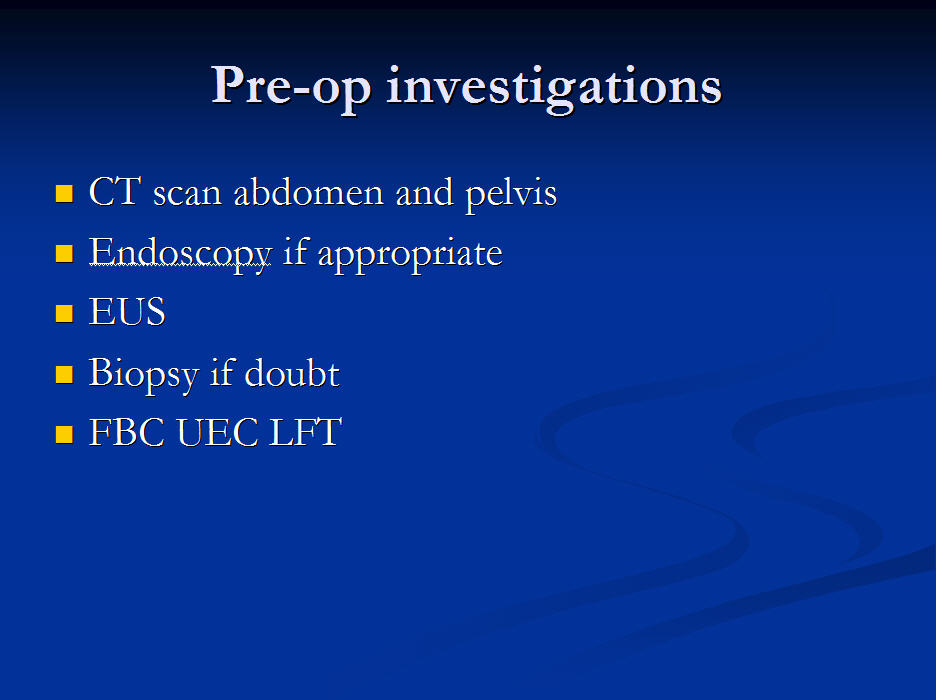 What this means is that to get the best outcome, the GIST should be removed in one piece, and cut back to healthy tissue. Any organs attached to it should have enough removed so that the GIST is not cut in any way. Because GISTs do not spread into the lymph nodes, unlike many other cancers, these do not need to be removed.

Small GISTs in convenient places may sometimes be removed laparoscopically. This means that the patient does not have a large incision, and will recover much more quickly. 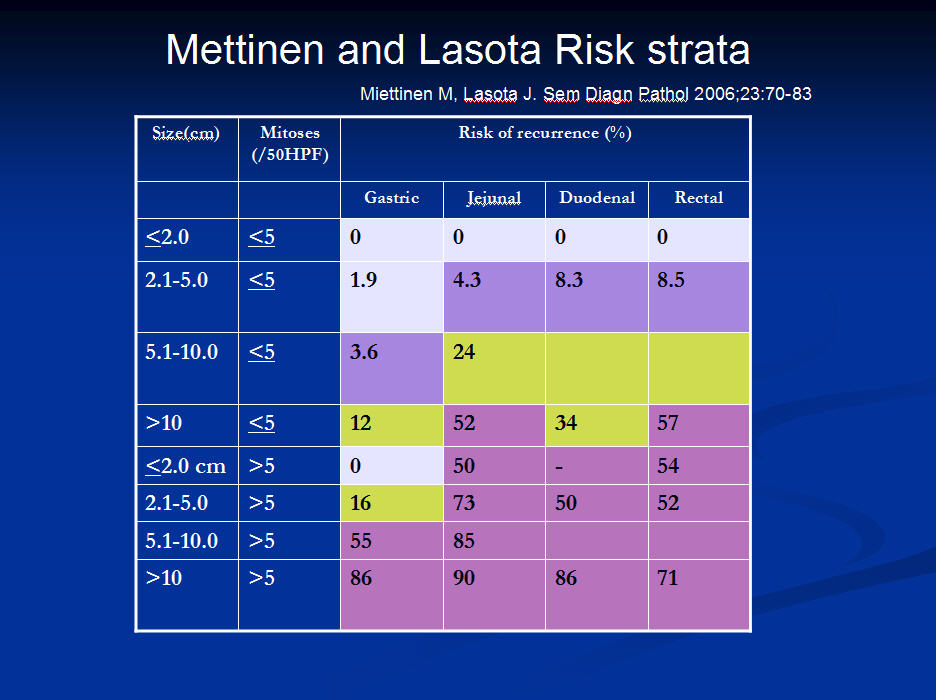 This table shows that the risk of recurrence depends on three factors:

So if you have to have a GIST, you want it to be on the stomach, growing slowly, and less than 5 cms wide. 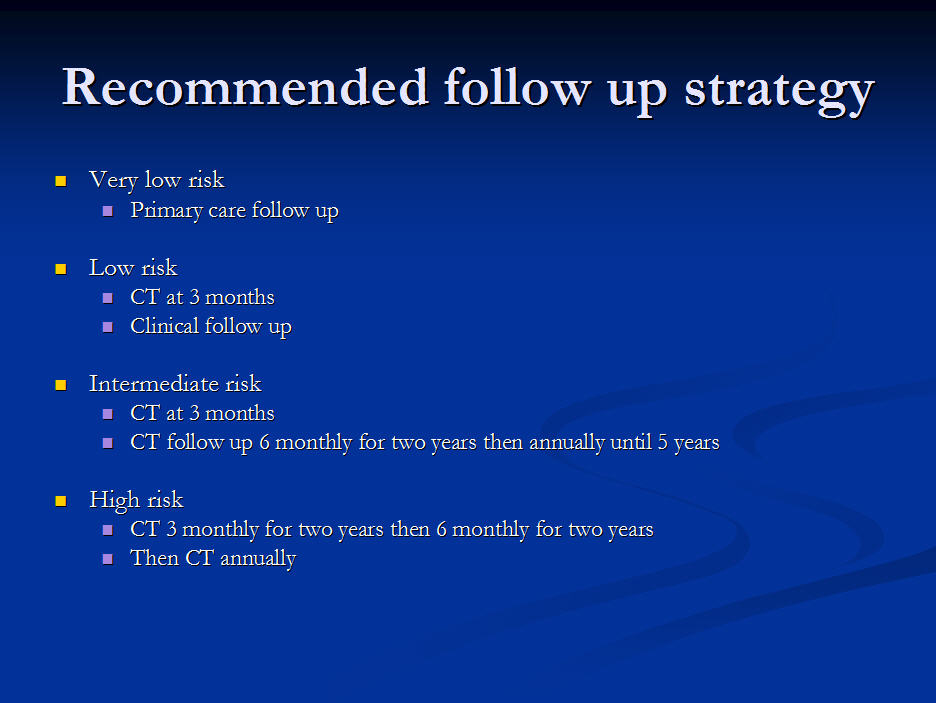 There are three trials currently exploring the use of imatinib after surgery to find our whether this adjuvant treatment increases survival.

These trials are all slightly different: 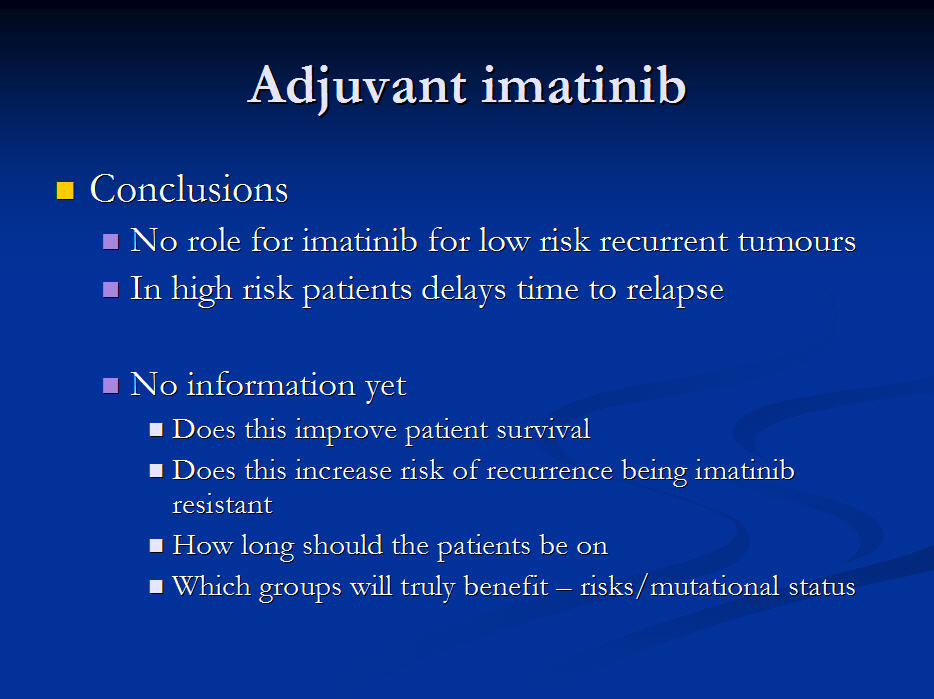 Data from the first trial of adjuvant treatment (2007), which was stopped early, shows:

However, we have no evidence yet about:

There is also a much-needed large study (UK-Europe based), with data covering 5 years. At present the data is not yet good enough on the effectiveness of Adjuvant imatinib on survival rates, but there is a probable benefit for High Risk patients in delaying recurrence. 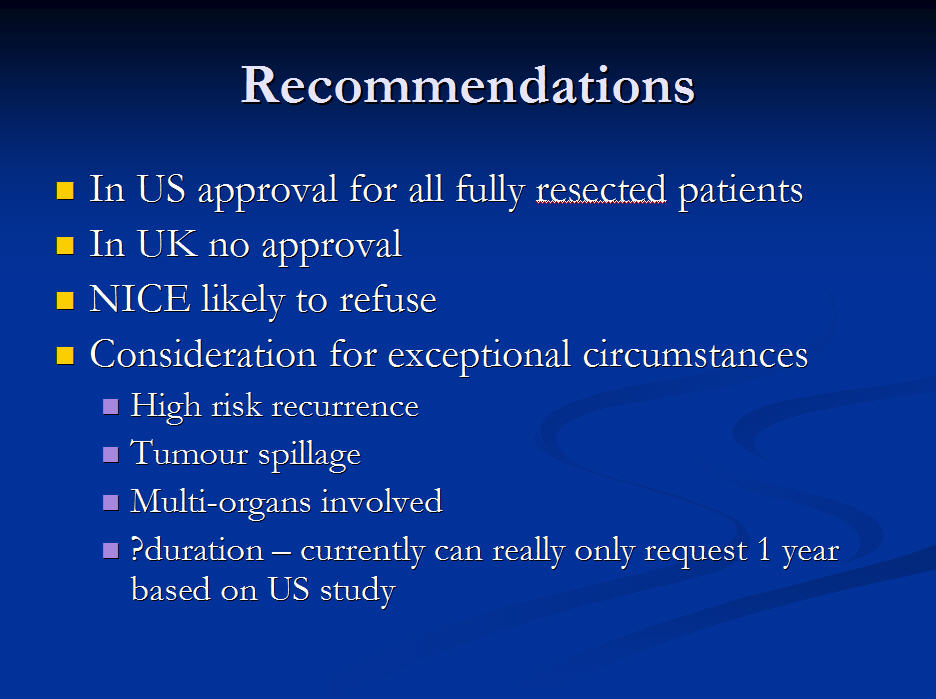 Although the US and most European countries have approved the adjuvant use of imatinib for high risk patients, this is not currently approved by NICE for the UK.

then the oncologist can ask for these special circumstances to be take into consideration with the Primary Care Trust, who may then fund the drug for a year. 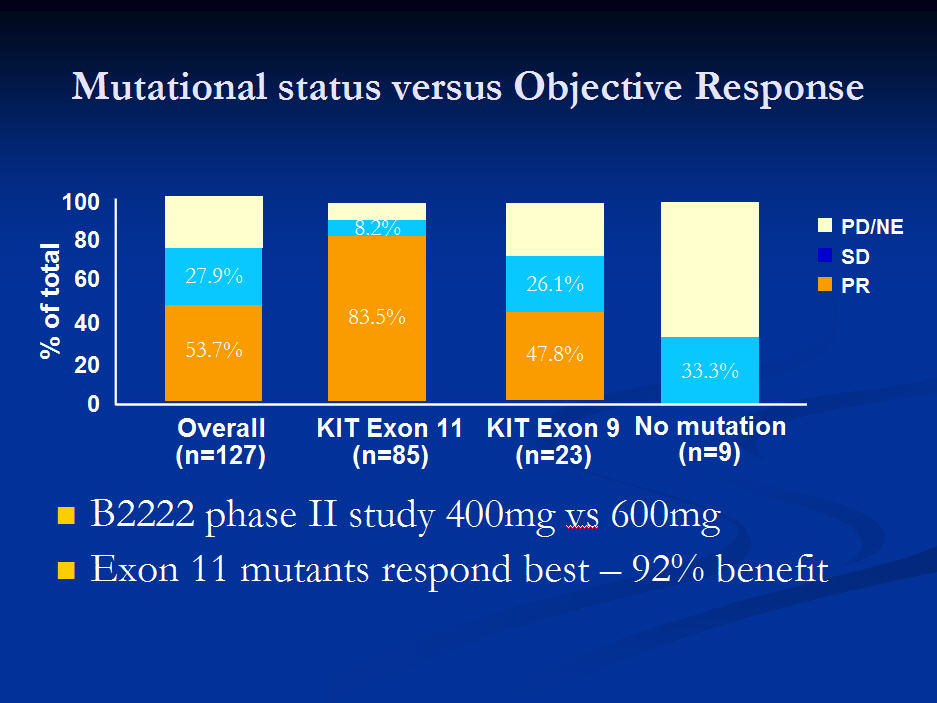 We now know that the way in which a GIST responds to imatinib depends to some degree on the mutation of the GIST. This chart shows the average response for the whole group of 127 patients, compared with the three main mutation groups, exon 11, exon 9 and wildtype, (with no known mutation.) The three colours represent, PR or Partial Response, (some tumour shrinkage), SD is stable disease, and PD/NE is progressive disease or no evidence of response.

There is no evidence that the choice makes a difference to survival rates. 800mg does, however, often work better for patients with an Exon 9 mutation.

This information is not necessary for all new patients. It is possible to obtain the mutation status quite quickly if and when imatinib does not work. 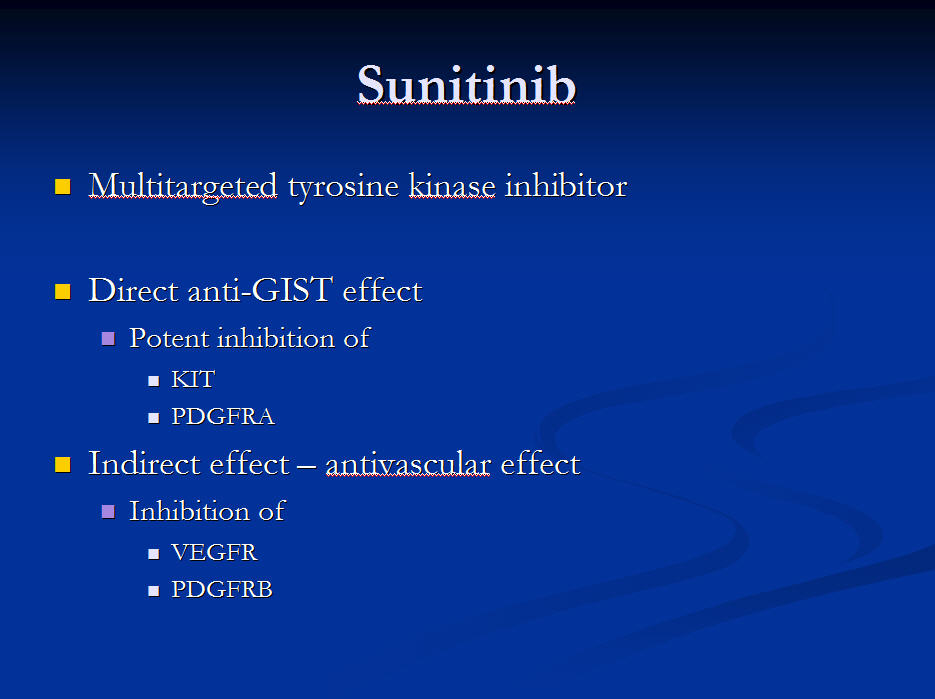 Sunitinib is now approved by NICE for patients who have progressed on 400mgs of imatinib, Because it has more than one target as a tyrosine kinase inhibitor, and because it helps to prevent the development of blood vessels to the GIST, it often works when imatinib has stopped working. However, because it affects more kinds of cells it tends to have more side-effects. It offers striking survival advantages. Exon 9 (and Wild Type) seem especially responsive, but at present the data is thin.

Michelle then summarised her suggestions as to what we should do if 400mg imatinib stops working:

Looking to the future

There are many studies now being undertaken. Some are looking at new drugs, including nilotinib, being given to patients for whom sunitinib has stopped working. Some are looking at different ways of using nilotinib and sunitinib. There are also investigations into the use of Radio Frequency Ablation and surgery for metastatic disease. There is even the possibility of using Cyberknife technology.

In all cases where sunitinib has failed, it is essential to be in the care of a specialist MDT which will have access to trials and be best able to advise on the next stage. Unfortunately, as yet there is no formal listing of such MDTs.

In answer to a question Michelle Scurr said that we do not know whether secondary mutations occur spontaneously during treatment with imatinib, or become predominant when the imatinib-sensitive cells have stopped growing, having been there all the time. We do know that in metastatic disease there may be different mutations present in different tumours.

Role of the CNS in Getting Best Care

Because of the unavoidable absence of the CNS we had hoped to have at the meeting, Judith summarised how she saw the Clinical Nurse Specialist, Sarcoma Nurse Specialist, or whatever s/he is called in your hospital, and the very important role they can have. Ideally, they understand your needs and those of your family or carer. They understand the different possible treatment pathways, the side effects of the drugs you may be taking, and if you have difficulties of any kind, they know who to contact if they cannot solve your problem themselves.

After some discussions in small groups, it became clear that:

Probably the most important development this last six months has been the beginnings of the initiative to improve the care and support of young GIST patients and their families. After our last meeting, Leigh Hibberdine and Jayne Brassington got together and the ball has started rolling. The other family involved are the McAullys, and Stacey produced a poster for the New Horizons GIST Conference in June which won first prize. (This conference is organised by Novartis for GIST and CML patient group representatives from all over the world.)

There is now a team of clinicians beginning to get a focus group under way. The idea is that this group will be a referral point for all Paediatric, Adolescent, Wild-type and Syndromic GIST patients in the UK. (PAWS-GIST for short.) The young people themselves have got a Facebook site running.

The Trustees were very sad to receive Terry Dickinson's resignation from their number, but are very glad to welcome Leigh and Jayne. They lower the average age considerably, and are bringing fresh energy to the team.

GCUK has been very much involved with NICE this year, and have had to accept the refusal to approve 800mgs of imatinib after the failure of 400mg. We submitted an appeal along with many other charities and the Royal College of Physicians, but this was turned down. The refusal to approve the adjuvent use of imatinib, but with the promise of a full re-appraisal when the trials report next year, was less of a shock. Both these treatments are approved in Scotland! We shall continue to represent GIST patients whenever we can.

GCUK has also submitted a paper to the Cancer Reform Strategy Government initiative.

Our web site is much used although it is beginning to need a re-vamp. In spite of this, it has been found to be very helpful and has had about 700 hits per month. We are planning to have a link to a new PGIST web site soon.

Leaflets are being sent out regularly, but if your hospital does not have any, do take some to put there. Or ask me for some later.

The Mailtalk group continues to be a very important part of the supporting role of GCUK. Many people contribute with information, suggestions, empathy and humour. The special phone line is also being used.

Financially, we are beginning to think we may have sufficient funds to consider a part-time administrator. This would be a great help to us, who all work as volunteers. We have had a number of generous donations from friends and patients, as well as the grants form Pfizer and Novartis, and we now have a Just-Giving site which makes it very easy and tax-efficient to give to us.

Finally, thanks to all who support our work: Novartis and Pfizer, Roger Wilson from Sarcoma UK, all our Trustees, and all of you who contribute by being willing to share your experiences. And last but probably the most important of all, our doctors, CNSs, pathologists, radiologists, and researchers.