It has been a busy month for some of our intrepid supporters. There have been marathon’s and walks across the nation and also in mainland Europe… 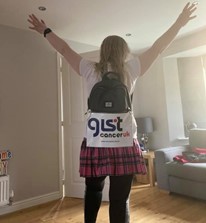 Jane Lochrie had a great time completing both The Kiltwalk and the Shine walk within seven days, with two of her friends and has so far raised over £700! 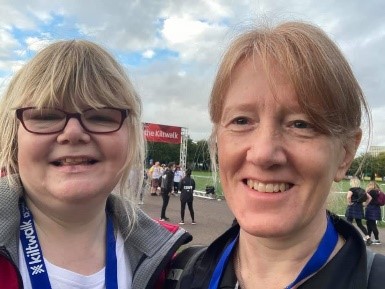 Here’s the link to Jane’s page if you would like to boost her fundraising.

Javier Perez Guisasola and Gavin Wilkins ran in the London Marathon and were spotted on TV!

Thank you both for raising awareness as well as funds.

Meanwhile in Manchester Dan Thornton took part in the Manchester Marathon to raise funds for GCUK.

PAWS-GIST patient Jo Arundel tells us about her and her husband Simon’s, Virtual London marathon experience… 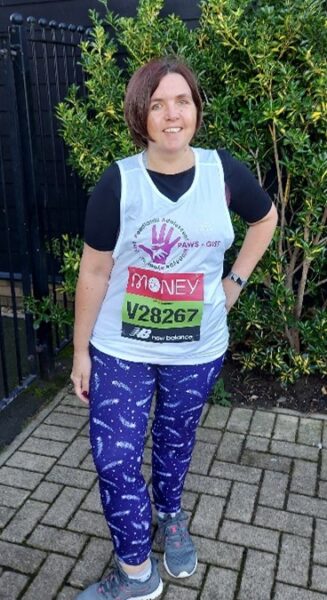 I saw a post on the GIST Cancer UK Facebook page asking for people to sign up to the Virtual London Marathon, and thought “I could do that”, and signed myself and my husband Simon up.

Simon has completed two Yorkshire Marathon’s before and didn’t take much persuading to do another.  I’ve had a long history of orthopaedic issues through an additional diagnosis of Neurofibromatosis, and have been told in the past “no contact sports, or high impact sports… especially long distance running”

Training started well, we signed up to the Couch to 5K app and put on our running shoes and off we went. Unfortunately, training didn’t go to plan. I’ve had a history of vertigo type symptoms in the past, and the symptoms flared up again over the summer and training fell by the wayside, so we decided to plan to walk most of the marathon, and “Jeff it” (break the marathon down into jogging/walking sections).

We set up a Just Giving page, and I kept Tweeting celebrities, asking them to re-tweet my post. Many of them did, and sent messages of support. Following a retweet by “The Last Leg” presenter, Adam Hills, we even had a donation to our page from someone who had seen the page!

Marathon day soon came around, the route was planned and we stocked up on Jelly Babies and Lucozade Sport, and off we went.

We planned to do two “laps” of 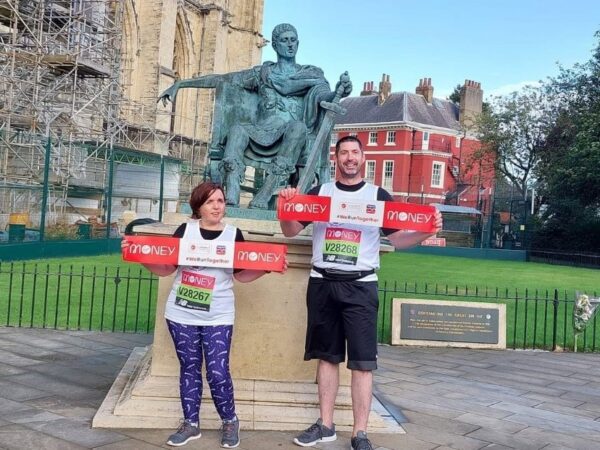 a route, and a shorter finish route. During the second lap, I began to feel unwell – possibly due to adrenaline and the enormity of what we were attempting. I somehow found some motivation to carry on, despite many times thinking “I can’t do it” and seriously doubting my ability, but then I thought of all fellow GIST patients including those sadly no longer with us.

We planned to finish at York Minster, and my parents & some friends were there to meet us at the “finish line”, and once we’d crossed the finish line, the tears started! My parents whisked us off to a nearby pub for a very well-earned Gin & Tonic. We hit every emotion during the day, and ached a lot afterwards. Simon has already hinted he wants to do another marathon, but as for me… I’m definitely hanging up my running shoes… never again!  It was a “real” marathon!

Here is a link to Jo’s Just Giving fundraising page if you would like to support their hard work!

Kevin Leather’s vitual marathon for GIST Cncer UK was cut short when his GIST operation date interrupted a very busy training programme. Despite this his friends and supporters have rallied to Kevin’s aid and helped him to raise over 85% of his target to raise £6,000. Please help him to beat his target by donating via this link 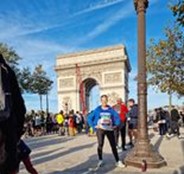 Lee Brown & the Dinnington Over 45 Football Team continue their season of events.

Lee Spooner & Niclola Frost look like they had a lot of fun at the Charity Fun Day that they organised  in aid of GCUK. 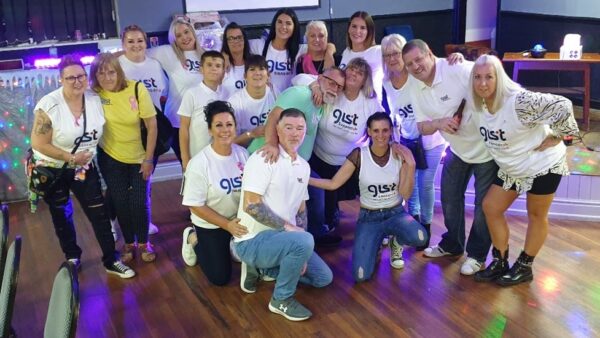 Sincere thanks to every one of our walkers, runners,  footballers and fun day revellers and to all of our other fundraisers.

You are doing us proud!